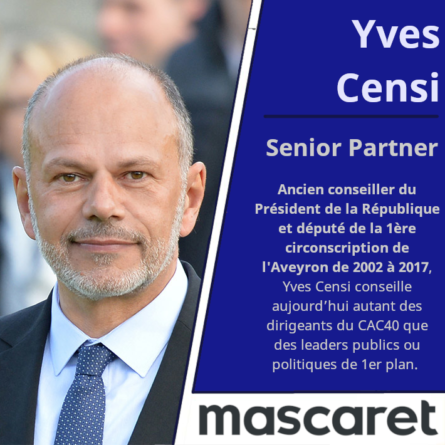 With more than 30 years of experience, the former MP will take charge of supporting major accounts and leading leaders. This new strategic recruitment is part of the rapid development of Mascaret, which wishes to position itself as a leader in strategic consulting for managers by strengthening its teams, both in France and internationally.

Yves Censi began his career as a consulting engineer in banking and finance organization at KPMG Peat Marwick Consultants before directing the marketing of online products for La Française des Jeux. Joining Jacques Pilhan, who had just democratized the profession of political communicator, in 1997 he became adviser to the President of the Republic Jacques Chirac at the Élysée Palace until 2002. Elected deputy for Aveyron from 2002 to 2017, vice-president of the Finance, General Economy and Budgetary Control Commission, he was also elected local, municipal and urban councilor of Rodez from 2014 to 2020. He is recognized for his expertise in political strategy and in the financing of the economy combining public and private funding.

Yves holds a Master’s degree in Labor Law from Panthéon Assas University, holds a DEA from ENS-EHESS (1990), auditor of the 2010 session of the Institute for Advanced Business Studies (IHEE), Young Leaders 2003 from the French-American Foundation. He is a frigate captain (H) in the citizen reserve of the French Navy.