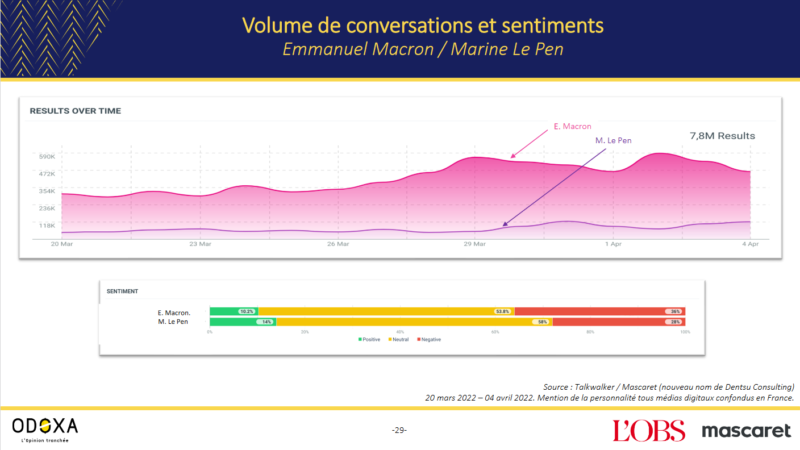 On the eve of the election, Mascaret reveals its opinion poll of voting intentions for the 2022 presidential election! In collaboration with Le Nouvel Obs and our partners at Odoxa. As abstention threatens tomorrow’s election, you will find in our report the main trends observed in the electorate a few days before this vote, as well as our analysis of social networks:

Largely ahead of his main “rival” on social networks, the outgoing President is also criticized for his tightening of social screws

“Emmanuel Macron has accumulated 6 million mentions over the last 15 days, where Marine Le Pen hardly reaches one million. In terms of commitments, it even has 10 times more results (20.6 million VS 2.4 million). This means that the media publish more about President Macron (obviously, announcement effect, meeting, Ukraine, McKinsey, etc.), but above all, that Internet users discuss it a lot more (and debate it!). Announcements and publicity stunts on the social (learning, retirement, RSA, etc.) in particular, are hotly debated but because they went very badly: we observe significant peaks after his declarations but, above all, the feeling negative towards Emmanuel Macron is greater than that towards Marine Le Pen (36% VS 28%)! than 16,000 tweets in one day, while the Republican “dam” is only mentioned in derision…
Opponents from both right and left rush to Marine Le Pen to capture her electorate, but without much success.

Opponents from both right and left rush to Marine Le Pen to capture her electorate, but without much success.

The candidate of the National Rally remains difficult to hear on the networks, Éric Zemmour steals a lot of space for expression and online communities. A few exceptions, however, such as the publications of Hugo Décrypte which are always very successful. It is moreover Marine Le Pen who is the most targeted by the competition – from all sides – her rivals hoping to steal her place hitherto “acquired” in the second round. On his right, the Zemmour phenomenon aims to represent hard right tendencies there, and on his left, a real Mélenchon dynamic is accelerating in this final straight… but it is difficult to know if he will succeed in seducing not only historical voters on the left, but also the popular electorate recovered by the National Rally over the past twenty years. »

A big thank you to Gaël Sliman and the entire Odoxa team, as well as to our partners at the Nouvel Obs for this titanic work on the 2022 presidential election. We hope to have been able to shed some light on the eve of this decisive vote. for our common future.

To find the details of the figures and all of our analyses, you can download the complete study below or on the Odoxa website.