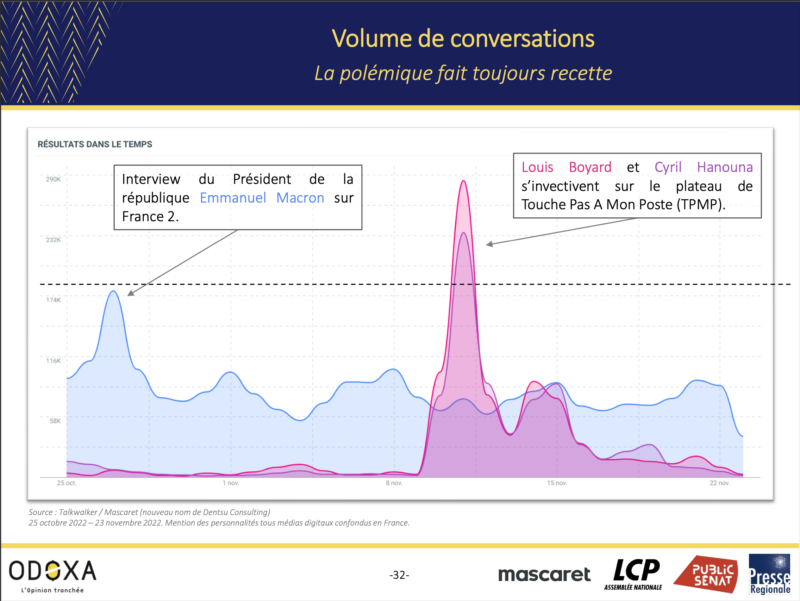 Once a month, Mascaret (formerly Dentsu Consulting) and its partner ODOXA offer you a political barometer to take the temperature of public opinion. This month: what is the evolution of the opinion towards politicians in a context of uncertain future? Benjamin GRANGE and Yves CENSI share their analysis of social networks:

Faced with the mistrust of the French, the uncertain President goes into hibernation

Faced with the mistrust of the French, the President goes into hibernation The mistrust of the French towards those who govern them is not new, but for the past few months, they have been talking about it more and more forcefully on social networks, pointing out the daily ravages of inflation. Faced with this defiance, the President of the Republic has chosen to speak rarely. He remains more in the background during the last 30 days (-25% of mentions and engagement compared to October, -40% over the last six months), limiting his interventions to try to make each one an opportunity. The bet was rather successful for his interview on France 2, which generated a mass of conversations (175 000 mentions). Less so for other statements – one thinks in particular of “We must not politicize sport”, 20,000 mentions – which have only softly buzzed the web.

On the political fronts, the government tries to put out the fires of protest… but fuels them

Faced with the space left by the president, it is the government that tries to fill it, the faithful in the lead. Elisabeth Borne of course, penalized by the unpopular “49-3” repeatedly (peaks at 75% negative feelings), still perceived by a large fringe as “anti-democratic”. Gérald Darmanin has also suffered the wrath of the opinion by intervening on the demonstrations against the “basins”, then by the management of the Ocean Viking, to finish with immigration. Olivier Dussopt, for his part, made people talk about the reform of the unemployment insurance.

Finally, Olivier Véran returned to the health policies, giving an opportunity to the anti-vax spheres to return to the forefront with violent publications.

LFI and LR in trouble, the RN on the offensive continues its normalization

The other consequence of this presidential strategy is that it leaves the field open to political opponents, who seize the opportunity to point the finger where it hurts. But if they try to take advantage of it, few succeed in the end. Jean-Luc Mélenchon, for example, who was ahead of Marine Le Pen in terms of volume, is no longer able to emerge in the turmoil of the Nupes. He reaches his lowest rate of mentions for over a year (535,000 against 505,000 for September 2021). Same penalty for Adrien Quatennens, Manuel Bompard and… Laurent Wauquiez who remains discreet since the revelations of Mediapart. As for Éric Ciotti, he sees his volume of mentions double (+128%), but not for the right reasons. Is this a free field for Marine Le Pen? Or Jordan Bardella? If the latter also suffers in terms of volume, it still succeeds in a good shot at the opinion: it has almost erased this month the negative feelings around its mentions continuing to normalize its movement. This is a rare fact for her who usually totals at least 50% of negative feelings.

The event of the month, which received almost twice as many mentions (175,000 vs. 285,000) as Emmanuel Macron’s visibility peak, was the almost violent confrontation between LFI MP Louis Boyard and TV host Cyril Hanouna on the set of the latter’s show, Touche Pas A Mon Poste (TPMP). The video excerpts, widely shared and commented on the networks, Twitter in the lead, make Louis Boyard a personality twice as mentioned (1,000,000) than Jean-Luc Mélenchon (535,000), and three times more than Marine Le Pen (330,000), in the month of November. Such a sequence, which manages to crystallize the tensions of the opinion, without bringing anything to the debate, remains the only media success of this month.

Find the complete survey with illustrations below: