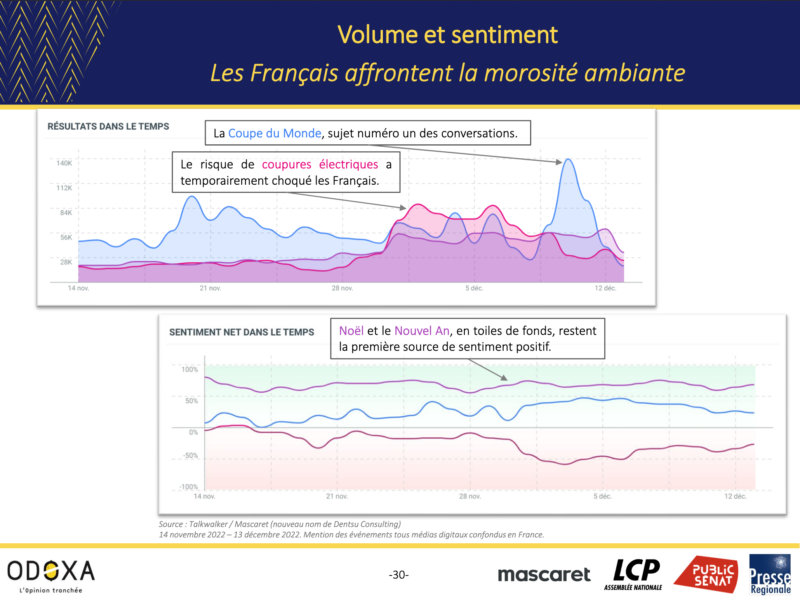 Once a month, Mascaret and its partner ODOXA offer you a political barometer to take the temperature of public opinion. This month : Elisabeth Borne is the target of all the criticism, Christmas and the World Cup help the morale of the French. Benjamin GRANGE and Yves CENSI share their analysis of social networks:

Risk of power cuts: the president flies to the rescue… of his government

Emmanuel Macron, who had recently taken a back seat, is gradually returning to the forefront of the media scene (+10% of mentions compared to last month). If he tries to surf on the craze caused by the French team – an approach that meets a strong skepticism among Internet users – it is especially on the subject of possible power cuts that he feels the need to intervene. Indeed, as the holidays approach, the French are very worried about these recent warnings, and the attempts of government members to reassure the public have not been enough. Bruno Le Maire, Olivier Véran, Élisabeth Borne… all of them are quickly pointed out by the opinion. The Prime Minister in particular has crystallized all the criticisms aimed at the political agenda of the majority, with pension reform and repeated use of Article 49-3 in mind. Indeed, she has reached her historical peak of negative sentiment since she took office: 80.1% of her mentions are negative!

The holidays and the World Cup are boosting French morale: a Christmas truce before the inflationary storm?

While one might have thought that the ambient gloom, rising prices and political conflicts would dampen the spirits of the French, it would seem that they have decided to take a welcome break. A breath of fresh air at the end of this anxious year, the good results of the French team in the World Cup are the number one topic of discussion this month with 1.8M mentions. Christmas and New Year are also a source of joy and resist the threats of inflation and price increases: the French are not letting themselves be put off and are still looking forward to this time of year. Beware, however, weak signals are beginning to appear: historical success, for example, of contests organized by e-commerce platforms of all kinds. People are desperately hoping to embellish their Christmas with beautiful gifts to put under the tree: the hashtag #Contest is more used and shared than the hashtag #Christmas!

Find the full survey below or on the Odoxa website.