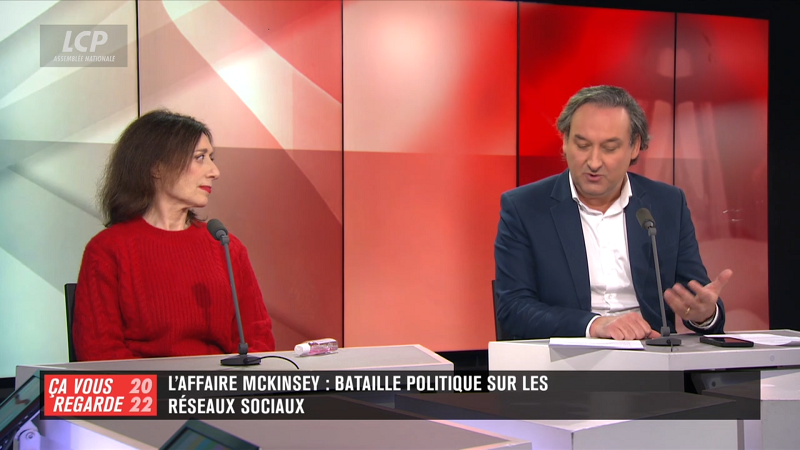 A look back at Benjamin GRANGE‘s analyzes of the McKinsey scandal on the eve of the 2022 presidential elections. Presented by Myriam Encaoua on the program Ça Vous Regarde on LCP (La Chaîne Parlementaire) and alongside Lasserre Isabelle, Journalist for Le Figaro. We find a decryption of all the information that upsets the last days of the French presidential elections of 2022.

Both sources of information and distribution channels, social networks are now essential elements of any electoral campaign. These allow candidates to challenge, get people to talk about, and then vote, a larger and more diverse audience than usual.
And given the mass of reactions produced by digital communication tools, it is impossible for certain political figures – who have still not decided on the candidate for whom they will sign, like Nicolas Sarkozy -, to escape multiple questions from the public and the press. What should be understood from the latter’s silence on his “favorite candidate” for the supreme magistracy?

“The McKinsey scandal: a blessing for the opposition”

Immediacy being essential on social networks, the mass of information produced testifies to the vigor of the public for the subjects. This makes it possible to base a judgment on the candidates for the positions of president. This is the case, for example, with the McKinsey scandal, which “poisoned Macronie” with its #McKinseyGate arising on the eve of the departure of the French for the polls. What consequences can this political scandal have in our current context?

For Benjamin Grange, this case represents “blessed bread for all opponents of Emmanuel Macron. Political opponents from all sides pounce on it and it is they who ultimately manage to score the most points. Similarly, he deplores the unfair juxtapositions of certain opponents, in particular Philippe de Villiers, whom he quotes during his speech. “Instead of talking about consulting firms, he talks about ‘private pharmacies’. We can clearly see where he wants to go. He tries to highlight one thing: the taxpayer pays twice. Once for senior officials and once for McKinsey consultants. It obviously puts the 2 populations in the same basket…”.

To follow his entire speech, you can watch the program again by double clicking below.