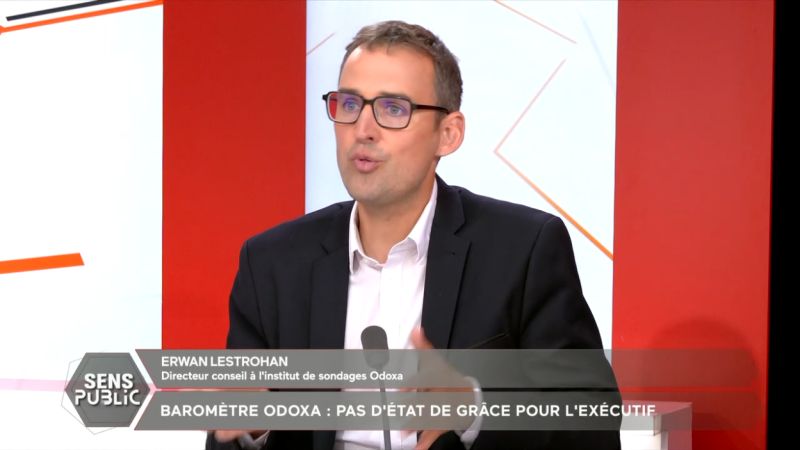 Barely a few weeks after his re-election, the Odoxa – Mascaret opinion poll for Public Senate reveals a decline in his approval rating.

Indeed, at the same period 4 years ago, the president enjoyed a rate of 58%. The day after his re-election, a recent opinion poll reveals that only 44% of French people believe that Emmanuel Macron is a good president.

What explains the decline of the president in the polls? What are the consequences ? Moreover, what do the French think of the Borne government? And what does the Odoxa-Mascaret poll tell us about the state of the French political landscape more generally?

Benjamin GRANGE from Mascaret sheds light on these questions during the program Sens Public. Also on the set were:

“We see the weak signals of a rising movement”, notes Benjamin Grange, “around dissatisfaction with the state of purchasing power” while Erwan Lestrohan underlines: “With this new government, the French were waiting for the change in continuity. There they see the continuity, but not the change”. The conclusion goes to Mélanie Vogel: “President Macron has not set a course for his five-year term after his victory, today the French are wondering what will be the novel nation these 5 years”.

While France awaits the legislative elections to have more visibility on the political landscape, this great moment of uncertainty carries a lot of questions about the future of the country.