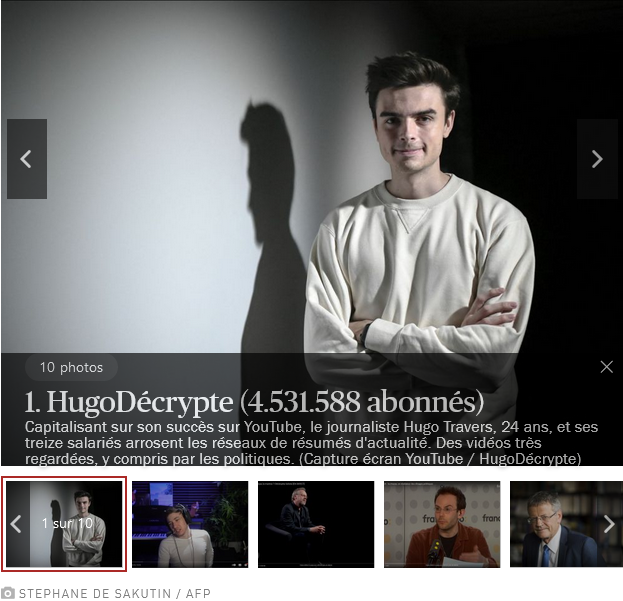 On Sunday April 10, 22, the French moved to the various voting centers to decide who should become head of state, including nearly 5 million 18-24 year olds. Who are their political influencers?

A specificity emerged during this first round

Mobilization and participation of young people. And this, despite the higher abstention rate than 2017 (1st round: 22.2% in 2017, against 25.14% in 2022). When, at the end of March, the magazine Challenges and Mascaret revealed a ranking of the 10 best political influencers of the year, a majority of them were from the new generations and monopolized digital platforms. They analyze political news, subsequently touching on a new, younger segment that is usually not very sensitive to certain themes.

The role of political influencers

This is the case of the young journalist Hugo Travers who, at barely 24 years old, has a YouTube channel – Hugo Décrypte – which exceeds 4,500,000 subscribers. He had already stood out during the 2017 presidential elections by interviewing the candidates. Since then, his notoriety and his legitimacy with the French have continued to grow, making him the youngest face of the free treatment of national and international news.

We also find in this ranking Tatiana Ventôse who uses the codes of social networks to inform her almost 300,000 subscribers on YouTube and Instagram, the excellent Clément Viktorovitch, political scientist, journalist, role player and expert in rhetoric who occupies the fourth place in the ranking, Pascal Boniface, famous director of the Institute of International and Strategic Relations (IRIS) and his school (IRIS SUP’), or even Jean Massie and Usul of Mediapart in the program Backseat, etc.

Young people occupy an important place on the scene of political debate in France, a place they did not expect. For the majority, this success is the result of opportunities seized thanks to digital communication tools. The “younger generation” has long been considered apolitical, but the current paradigm exposes the obsolescence of such ideas. Youth and politics are no longer opposing terms.

It is therefore judicious to observe the impact of this new commitment of young people on the outcome of the presidential elections. Are we going to witness a drop in their participation when we know that their favorite candidate, Jean-Luc Mélenchon, will not be in the second round? This one obtained more than 30% of those under 35 years old, as for the reverse, the electorate aged at least 60 years old mainly focused on Emmanuel Macron. Are we facing a real intergenerational conflict? The role of political influencers will be key in the future.

Find the details of our inquiry by clicking on this link.