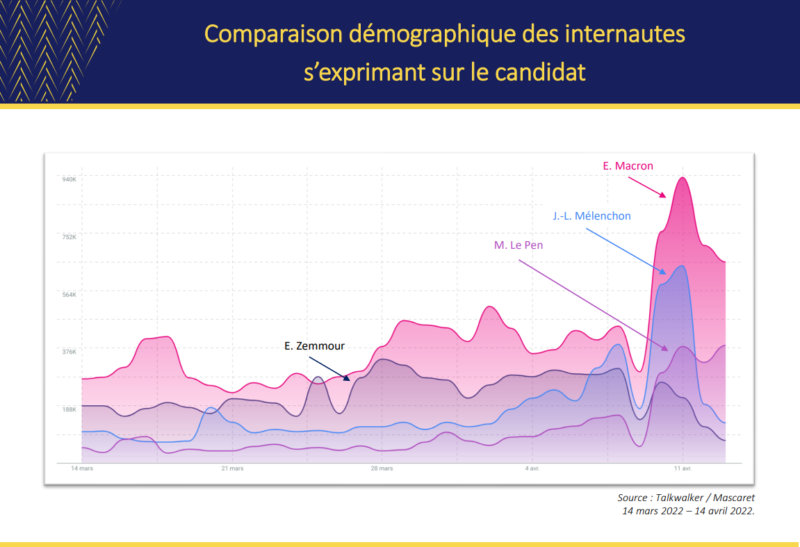 Before going to vote this Sunday in the second round of the presidential elections, read our latest barometer! The big question of the moment: to faire barrage or not to faire barrage? In french, this an expression meant to designate the usual union formed around any candidate that opposes the far right. Nowadays, this union is in shamble…

Benjamin Grange and Yves Censi share their analysis of social networks with us in this ultimate Odoxa, Mascaret & L’Obs barometer:

E. Macron, leader of the election on social networks faces a rival on the rise.

“Emmanuel Macron retains a large lead on social networks, a bonus for the outgoing president supported by a strong mobilization of his supporters (Blanquer, Le Drian, Le Maire, but also Estrosi, Philippe or Sarkozy). With 12.5 million mentions and more than 50 million engagements, it largely dominates its rival. However, it benefits from the disappearance of the other “anti-system” candidates for its online communication. Hitherto stifled, it is truly re-emerging in discussion spaces and accelerating more and more: with 3 million mentions (+115% compared to the previous month) and 15 million engagements (+125%), the face- face-to-face materializes.

The orphans of the first round are torn over the definition of the “lesser evil”.

If the unfortunate candidates have now disappeared, we note an impressive peak for Jean-Luc Mélenchon the day after the election: 5 million mentions (+95%) but above all 27 million commitments (+170%). What this last figure indicates is the extraordinary activity on social networks around the Mélenchon subject, and in particular a good part of orphan voters put in the hot seat. And they are not alone: ​​the question arises – less in terms of traffic – for other candidates and their supporters. The big question today: “Which is the lesser evil, Macron or Le Pen?” »

The refiguration of “reluctant votes” or “rejection against rejection”. On the one hand, among the top 25 of the most used hashtags over the past 30 days, we find #MacronDegage2022, #ToutsaufMacron and #MarinePrésidente facing a little #5ansdeplus pro-Macron. On the other hand, we have an impressive increase in the use of the terms “extreme right”, “racism” and “fascism”, revealing real concern among Internet users. The same goes for the Republican “dam”, which was widely mocked at the time but which is now becoming a reality: from less than 50,000 daily results on average, we have reached a peak of 250,000 mentions to date. However, on this traffic, we notice that more than 30% of the feelings are negative… A barrier difficult to mobilize and which will therefore be done reluctantly. »

Find all of our expertise below or on the Odoxa website.